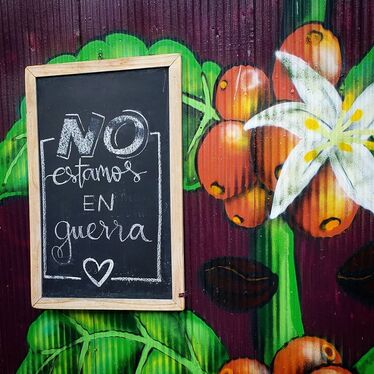 "We're not at war" - Local ice cream parlor in Cerro Alegre
​As a country, we haven't been very famous recently in international news.
Unfortunately the struggle for a new constitution -- for a new Chile, has had the violent aspect of these protests as the main focus for media outlets throughout the world.
Valparaiso, Santiago, and the rest of Chile, continue to be pointed at as a destination full of chaos, and many people believe this, and are choosing not to visit Chile.
As locals, our version of the story is that, if there were ever a time for you to visit our country, it's probably now.

1 - Safety is not an issue for tourists, there have been NO CASES of tourists being affected violently
2 - The Tourists Districts of Valparaiso have had no issues at all with protests
3 - Great offers from tour companies everywhere
4 - The dollar is skyrocketing, so the exchange is great for visitors
5 - There is a low occupancy at hotels
6 - A lot of new artworks popping up all over the country

We're not trying to tone down the situation, because it is a heavy situation; it is a tough situation for a lot of the people who are living in Chile; however, it's something that we find be extremely fair, which is a fight for justice, for respect, and the economic freedom of our future generations.
As a company, we will continue to support the cause of a righteous treatment for all people living in Chile, and we will continue to invite as many people as possible over to Valparaiso, trying to get everyone to understand that this has nothing to do with visitors, and their safety, rather than with local people who are fighting on different scales, with what they feel is  a corrupt system, which needed to get this wake-up call a long time ago.

​​Many people are calling this “The 30 Peso Revolution”.
In mid October, The Santiago Metro (subway system), had announced that they were going to be increasing their fares by 30 CL Pesos. Having one of the most expensive Transportation Systems, per capita, in the world, a group of students decided to collectively start an Evasion Movement, where everyone would just hop over the turnstiles, and take over the busiest Metro lines in the country.
That same day news started to show us how the police were using excessive force, and acting extremely violent, against the students.
At that moment, people started to realize that the protest wasn't just about the 30 peso increase; it was actually about how everything in Chilean Society is extremely expensive for the people who live in this country -- for example, how police have been using excessive force since the 70’s; how people retire with 200 usd a month, after having worked all of their lives; How politicians get away with heinous crimes, and worst of all, how we have been acting like everything is OK.
In the course of the next few days, protests took place all throughout Chile, taking over main highways, transportation lines, and worst of all, looting began to happen to most multi-national chains and stores in Chile.
Looting began on Saturday the 19th, and continued for four days,  affecting stores such as Wal-Mart Chile, Cencosud Chile, amongst many others, and later continued to smaller stores.
Due to the Looting, and fires which set these multi-nationals, the President of Chile decided to declare “State of Emergency”, and for the week of the 21st of October, we had a curfew which began between 6 and 8 p.m., and ended at 6 a.m.
Peaceful protests continued throughout the week of the 21st, and by the end of the week, police started to use excessive force upon peaceful protesters.
The Vice President of Chile resigned from his position, and the rest of the political parties are talking about a possible impeachment, which is all hearsay for now, and we’ll only know what's really going to happen over the course of the next few weeks.
This morning, Carabineros de Chile (Chilean police), are going under review for unlawful acts of violence, and peaceful protests continue.

What is the current state of Valparaiso?

Safety
Safety has not been an issue for travelers and tourists that are staying in Valparaiso right now. Our tours are taking place with normal schedule as we are in the western part of the city, and we do our tours through the art districts, which have had a lot of new paintings speaking out on the current state of Chile, but no violence with the police force

Transportation
Buses have been running regularly between Santiago and Valparaiso; the frequency has slowed down, so, instead of buses every 10 or 15 minutes, we're having buses every 20 and 25 minutes.
The bus terminal has been working from 7 a.m. to 8 p.m.
Taxis, Ubers, and Registered Tourism Vehicles have had services non-stop, 24/7.

Tours and Activities
Due to the fact that street art is a very rebellious and conscious movement, done freely by the people, we have been using this topic as one of the main topics of our tours, due to all the new art that's been popping up all over Valparaiso. We're not really doing a political tour; however, we are doing a tour that is explaining what's going on in the country right now through its art.
We are working with our regular schedule, and our team is prepared for any eventuality that might cause problems during any of our tours, which luckily has not been the case. We are still carrying out walks on a daily basis; we have our bikes in perfect shape, and our vehicles are in top condition.
The Valpo Street Art Tours Team is standing behind this cause, as it is one of the most necessary protests we've had in many years.
Tourism companies many times want to show people how great and how beautiful a country is, how tasty the food is, but we can't look the other way on these social issues which are affecting our neighbors and fellow Chileans.
We have been at the plaza for our public tour every single morning, no problems whatsoever.